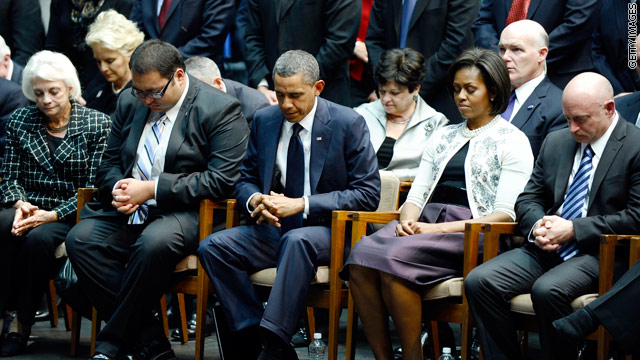 • President Barack Obama spoke at the memorial service in Tucson, Arizona last night, and the response to his words have been almost universally positive. From CNN: "In between consoling those touched by Saturday's Arizona shooting and warning the nation against politicizing the tragedy, President Barack Obama delivered some good news in his address at a Tucson memorial event on Wednesday."

• What was that good news? Rep. Gabrielle Giffords opened her eyes for the first time since the assassination attempt. Dana Bash reports: "Sen. Kirsten Gillibrand, D-New York, let it be known that she, Rep. Debbie Wasserman Schultz, D-Florida, and House Minority Leader Nancy Pelosi, D-California, were in the room at the time, along with Kelly and Giffords' parents."

• Following Sarah Palin's video message about the shooting and the response, she has been criticized by some for her use of "blood libel." From CNN: "The Anti-Defamation League, an organization that combats anti-Semitism, says Sarah Palin should have used a different phrase than "blood libel" to characterize attempts to link her discourse to the Arizona shootings, the latest in a series of criticisms leveled at the former Alaska governor Wednesday over her use of the controversial term."

• Major flooding in Australia has had devastating results in Brisbane. From CNN's Hilary Whiteman: "Floodwater that threatened the worst flooding in Brisbane in decades slowly started to recede Thursday, carving a muddy trail of destruction through the city which authorities warned would take months to clear up."

• The number one team in college basketball lost last night to a conference rival: "Duke is undefeated no more. And once again, it was a trip to Tallahassee that did in the Blue Devils. Derwin Kitchen scored 17 of his 22 points in the second half and unranked Florida State pulled off its latest upset of No. 1 Duke, snapping the Blue Devils' 25-game winning streak with a 66-61 victory Wednesday night."