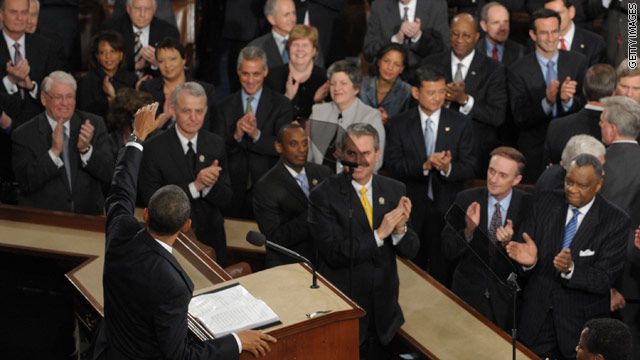 For January 14, 2011, the State of the Union next week may get bipartisan seating, and Rep. Giffords is recovering remarkably well..

• Will the traditional separation of Democrats and Republicans during the State of the Union address change, in the wake of Tucson? CNN's Gabriella Schwarz reports: "Colorado Democratic Sen. Mark Udall's idea of having members of both political parties sit next to each other at this year's State of the Union address is gaining traction – some positive and some negative. Senate Majority Leader Harry Reid said Udall's "thoughtful suggestion" is worth "serious consideration."

• Rep. Giffords' husband Mark Kelly is scheduled to command the final space shuttle mission, but plans are underway for a backup, just in case he cannot make it: "Astronaut Rick Sturckow will serve as a backup commander for the mission so the crew and support teams can continue training, NASA said." The mission is scheduled for April 19.

• The Spider-Man musical is facing yet another delay: "The opening of the Broadway musical "Spider-Man: Turn off the Dark" has been postponed for the fifth time, making the new opening night March 15, its producers said."

• CNN's Ed Henry reports Bob Dole is out of the hospital after "three stays in various hospitals after suffering from an infection that led to a fever."