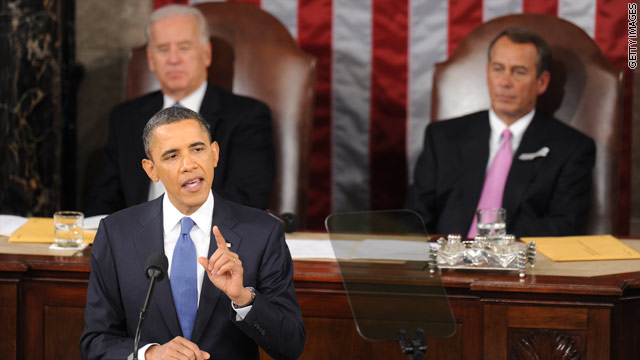 • President Barack Obama delivered his State of the Union last night while the legislative audience mingled between Democrats and Republicans. From CNN: "Sounding themes of optimism and pragmatism in his 61-minute speech, Obama called for increasing investments in key areas such as education and clean energy while freezing some government spending for five years in an attempt to address simultaneous needs for economic growth and fiscal balance."

• Now, President Obama is headed to Wisconsin. Leslie Bentz reports: "The President is expected to tour several businesses including an energy company on Wednesday during his visit. "

• Rep. Gabrielle Giffords' condition has been upgraded from serious to good, and she is transferring again. From Elizabeth Cohen: "The announcement late Tuesday night came after her husband said she had watched an hour of television from her hospital bed. Her husband, Mark Kelly, called the development "'exciting,' " said Rep. Debbie Wasserman Schultz, a friend of Giffords."

• Protests in Cairo have ramped up. From CNN: "A day after an unparalleled display of public rage at Egypt's government and full-throated cries for the ouster of its longtime president, the country's security forces made their own potent presence felt on the angry streets."

• And the snow has returned for the East Coast of the U.S. From CNN: "Hartford, Connecticut and the Boston area could get as much as 10 inches of snow by Wednesday night, the weather service reported. Areas in Pennsylvania are expected to get up to eight inches of snow. Parts of New York could get up to seven inches of snow."