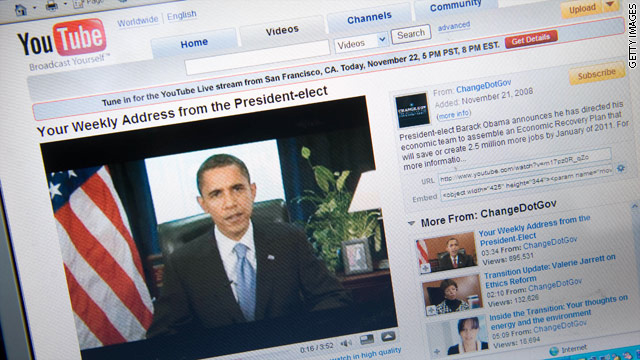 Need To Know News: Obama and YouTube, Tea Party and health care, Kucinich and an olive

• Following Tuesday's State of the Union, it's time for the YouTube Q&A for President Barack Obama. From CNN: "The interview on YouTube at 2:30 p.m. ET is part of a series of events in which top administration officials are talking directly to Americans about administration policies set out in Tuesday's address to a joint session of Congress."

• The weather in the northeast is a mess, again. From CNN: "The major snowstorm that pelted much of the Northeast will taper off Thursday, but schools, government offices and some airport runways could remain closed. Winter storm warnings that stretched from the southern Appalachian mountains to coastal Massachusetts were due to expire Thursday morning."

• A base in Utah is on lockdown. From CNN: " A Utah military facility that tests chemical and biological weapons was locked down "to resolve a serious concern," and authorities were working to reopen the base, officials said Thursday."

• Rep. Dennis Kucinich is suing Congress over an olive. CNN's Ed Hornick reports: "In 2008, the Ohio Democrat purchased a sandwich wrap filled with those olives at the cafeteria inside the Longworth Office Building. After biting into the wrap, he cracked a tooth, according to the legal complaint. Now he has come forward with a $150,000 lawsuit against the cafeteria – run by Restaurant Associates and other groups – for providing "dangerous" sandwiches."