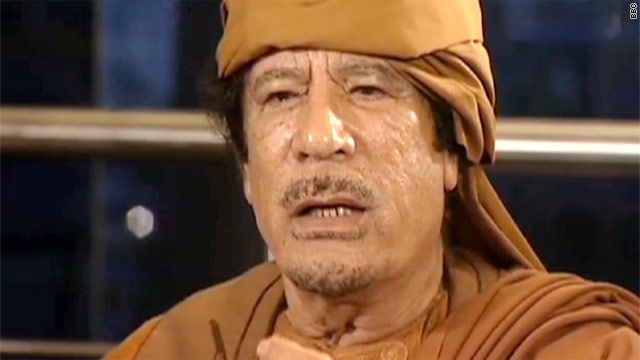 • Pro-Gadhafi forces failed to take a rebel-held town yesterday: "Forces loyal to Libyan leader Moammar Gadhafi tried to retake a town near the capital that is in opposition control but were repelled, an opposition leader in the town told CNN Tuesday." Meanwhile Moammer Gadhafi says Libya supports him: "Libyan leader Moammar Gadhafi appeared Monday either to not know that demonstrators in cities throughout Libya are calling for an end to his rule or not accept it, according to excerpts from the interview, which a U.S. official described as 'delusional.'"

• Charlie Sheen appeared on "Piers Morgan Tonight" last night, and, well, a lot happened. Here's some of the CNN recap: "Capping a day of bombastic assertions and harsh accusations on the airwaves and internet, embattled actor Charlie Sheen lashed out Monday at addiction specialists and sitcom executives while proclaiming himself clean and focused thanks to an "epiphanous awakening." "I feel more alive, I feel more focused, I feel more energetic," Sheen told CNN's Piers Morgan. "I'm on a quest to claim absolute victory on every front."

• Jane Russell, movie legend, died yesterday: "The 1940s and '50s movie bombshell, whose name was synonymous with voluptuousness, died Monday morning at her home in Santa Maria, California, her family said. Jane Russell was 89. Daughter-in-law Etta Waterfield said that Russell was a "pillar of health" but caught a bad cold and died of respiratory difficulties."

• Here's an update from Wisconsin: "Facing a flood of red ink and embroiled in an effort to curb the collective bargaining rights of most public workers, Wisconsin Gov. Scott Walker is scheduled to unveil his new state budget on Tuesday."

• Christine O'Donnell will not be dancing: "Christine O'Donnell, the surprise Republican Senate nominee in Delaware last year, has taken a pass on the opportunity to step back into the spotlight with an appearance on ABC's Dancing with the Stars." But here's who will be dancing.