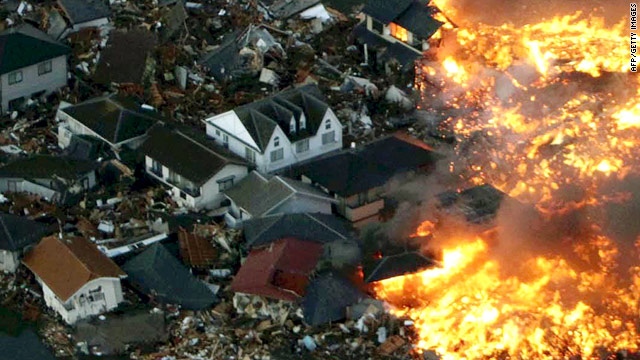 For March 11, 2011 – massive earthquake hits Japan – tsunamis arrive and more expected. What will economic impact be? All the details below:

• One of the most powerful earthquakes in recorded history hit Japan overnight: "The most powerful earthquake to hit Japan in at least 100 years unleashed walls of water Friday that swept across rice fields, engulfing towns, dragging houses onto highways and tossing cars and boats like toys, apparently killing hundreds and forcing the evaucations of tens of thousands."

• Tsunamis are expected as a result around the world, including in Hawaii: "Tsunami waves resulting from Japan's deadly earthquake rolled onto the Hawaiian Islands about every 15 minutes Friday morning, bringing waves of nearly 7 feet to a harbor in Maui, authorities said."

• Other areas that may be affected by tsunamis: "The wide-ranging list includes Russia and Central American countries like Guatemala, El Salvador and Costa Rica and the U.S. state of Hawaii. The weather service's bulletin said it was intended "as advice to government agencies."

• The quake has affected transportation and more in Japan: "Currently, none of Tokyo's major train lines are running, and officials say that they won't run again until Saturday morning at the earliest. Some bullet train services are operating. Flights have been canceled and Narita airport (which serves most international flights to Tokyo) is closed. According to Mainichi Shinbun, Haneda airport, which is closer to Tokyo has reopened. All maritime ports are closed."

• Find the latest breaking news about Japan and the rest of the world on CNN's This Just In blog.