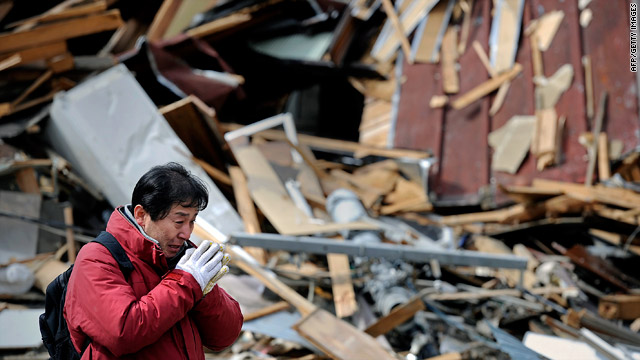 • Japan is trying to cool off nuclear reactors from the air and the ground: "Japan turned helicopters, fire trucks and police water cannons on the No. 3 reactor at the quake-ravaged Fukushima Daiichi nuclear power plant and the pool housing its spent fuel Thursday in its latest attempt to stave off a nuclear disaster."

• Experts say the U.S. won't feel health effects from Japan: "The United States is thousands of miles from the leaks and once the radiation gets into the air, it disperses and dilutes as the wind blows it, said Nolan Hertel, nuclear engineering researcher at Georgia Institute of Technology. Radioactive particles travel with the wind and fall out onto the ground. The amount that will reach the United States will be too little to cause health problems."

• Police seize alleged child sex offenders in worldwide operation: "Police have arrested scores of suspected child sex offenders in a three-year-old worldwide probe, the European Law Enforcement Agency announced Wednesday. Europol said 670 suspects have been identified, 184 arrests have been made, 230 children have been rescued, and investigations are continuing in a case authorities are calling Operation Rescue."

• Are $5 ATM fees coming our way? " ATM fees are on the rise at some of the country's biggest banks. Chase, for example, is testing out $5 fees for non-customers. That means if you stumble upon a Chase on your way to dinner and decide to take out 20 bucks, you'll pay a 25% fee. And that doesn't even include what your own bank charges you for going out of network, which is typically around $3."

• Glee debuts original songs: "It was a super huge episode with so much angst. The glee club members struggled to write an original song for Regionals and ended up with some interesting results. Santana's ode to Sam's lips, "Trouty Mouth," was just too much. Puck (barely) did a little bit better serenading Lauren with 'Big Ass Heart.'"