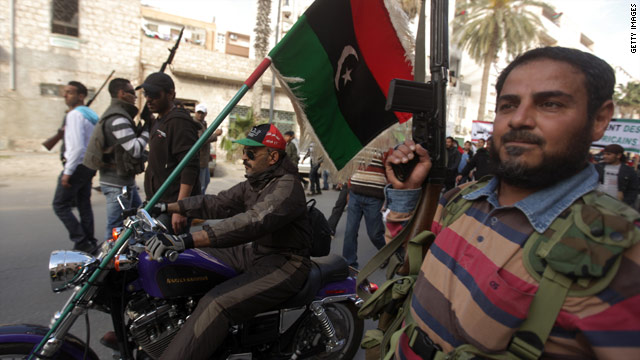 • Fifth night of airstrikes unable to stop Gadhafi: "Focusing now on Libyan ground forces, coalition jets pounded targets for a fifth consecutive night but so far have been unable to stop Moammar Gadhafi's armor. A resident in Misrata told CNN that he heard an explosion and that snipers loyal to Gadhafi were operating from rooftops in the besieged western city."

• Two planes land at Washington airport without controller help: "Two planes landed safely early Wednesday morning at Washington's Reagan National Airport after they were unable to reach anyone at the airport's air traffic control tower, according to the FAA and the National Transportation Safety Board."

• More U.S. states find traces of radiation from Japan: "Colorado and Oregon have joined several other Western states in reporting trace amounts of radioactive particles that have likely drifted about 5,000 miles from a quake and tsunami-damaged nuclear power plant in Japan, officials say."

• Taylor farewell sheds light on obituary reporting: "For many readers, Elizabeth Taylor's obituary in The New York Times sparked tears, memories and a question. An editor's note at the bottom read: "Mel Gussow, the principal writer of this article, died in 2005. William McDonald and William Grimes contributed updated reporting." How could the writer die before the actress?"

• New Color app promotes mobile voyeurism: The makers of a new and much-anticipated smartphone app called Color are operating on this principle: "We're all inherently voyeuristic," said Peter Pham, president and co-founder of the Palo Alto, California start-up. Color, however, is a location-based, photo-sharing app that takes voyeurism to post-Twitter level by letting users see all of the photos that are being taken by strangers who happen to be within a 150-foot radius of the user's smartphone."