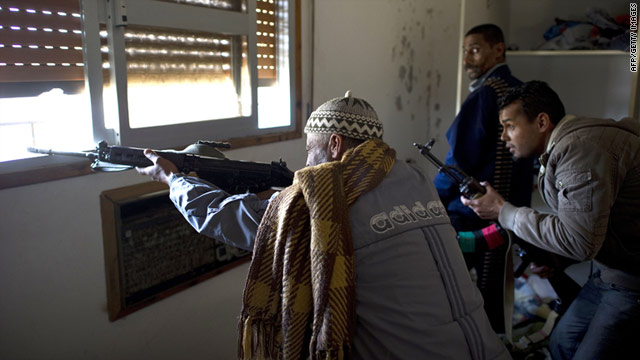 • Two photographers killed in Libya: "Friends and loved ones of two journalists killed in Libya remembered them Thursday as brave men committed to finding and exposing the truth even in some of the most dangerous conditions. Oscar nominee Tim Hetherington and acclaimed photojournalist Chris Hondros died Wednesday while chronicling the gritty violence in the war-torn city of Misrata in Libya, their agencies said. Two other photojournalists were hurt in the incident, according to news reports."

• Rebels claim they hold Libyan border crossing: "Libyan rebels seized control of a key border crossing into Tunisia, a spokesman for an opposition group said Thursday. The crossing in Wazen, Libya, could prove key to access to the city of Nalut, under siege by Moammar Gadhafi's forces for the past month. Thousands have fled the fighting through Wazen to the nearby Tunisian town of Dehiba, where temporary camps have been set up for the displaced."

• FAA to monitor VP, First Lady's D.C. flights: "Both the Federal Aviation Administration and the independent National Transportation Safety Board are investigating an aborted landing by a plane carrying first lady Michelle Obama because it was too close to a military plane ahead, officials announced Wednesday."

• Report shows iPhones secretly track their users' location: "Apple devices appear to be tracking their owners' locations and storing data about people's whereabouts without their knowledge, according to a report posted Wednesday on a site called iPhone Tracker.The unauthorized surveillance started in June 2010, when the latest version of Apple's mobile operating system was released, according to two researchers who say they discovered a hidden tracking file and posted it out of concern for users."

• Tickled penguin video goes viral: "More than a million people have watched a YouTube video of a penguin being tickled at the Cincinnati Zoo." Add yourself to the list. Happy Thursday!