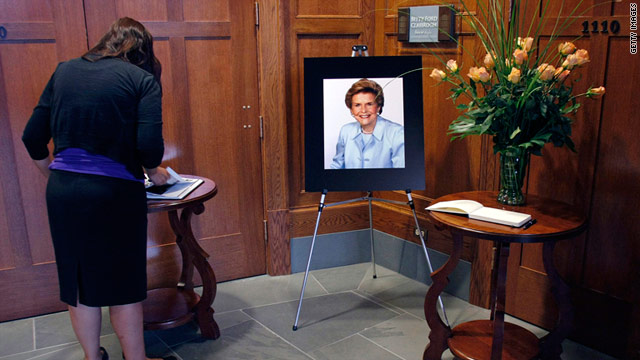 Need to Know News: Betty Ford service to be attended by past first ladies; GOP, Democrats to huddle once more cutting federal debts

• Betty Ford service to be attended by past first ladies, ex-presidents: "Current and past first ladies and two former presidents will attend a Tuesday memorial service in California for former first lady Betty Ford. The White House announced that Michelle Obama would travel to Palm Desert, California, for the National Tribute Service."

• GOP, Democrats to huddle once more cutting federal debts, deficits: "Top Democrats and Republicans are scheduled to meet again Tuesday after the two sides could not reach a breakthrough during a White House meeting to address the nation's mounting federal deficits and debt, a congressional aide said."

• Heat wave spreads into the Northeast: "A dangerous heat wave slowly began to ease in the nation's heartland even as it spread into the Northeast, the National Weather Service said. Twenty-three states and the District of Columbia were under heat advisories Tuesday. Excessive heat warnings are in place from western Oklahoma to Connecticut, and from the Deep South to the Ohio Valley. In these areas, the heat index, or how hot the body feels due to the combined effects of heat and humidity, will reach between 110 and 115 degrees this week."

• Afghan president's half-brother shot dead: "The half-brother of Afghan President Hamid Karzai was shot dead at his home in Kandahar on Tuesday, authorities said. Ahmed Wali Karzai, the Kandahar provincial council chief, was killed during a gathering, said provincial governor Tooryalai Wesa. He did not know a motive. While the governor initially said a friend killed Karzai, his spokesman later clarified that the death was at the hands of a guard."

• Yankee Cano wins Home Run Derby: "It is both Robinson Cano's curse and his blessing that he makes everything he does look easy. Even when staring at a serious mountain in the finals against Adrian Gonzalez - Cano needed to set a new finals record of 12 to beat Gonzalez, who had matched the existing record of 11 - the Yankees second baseman appeared to be the picture of calm."