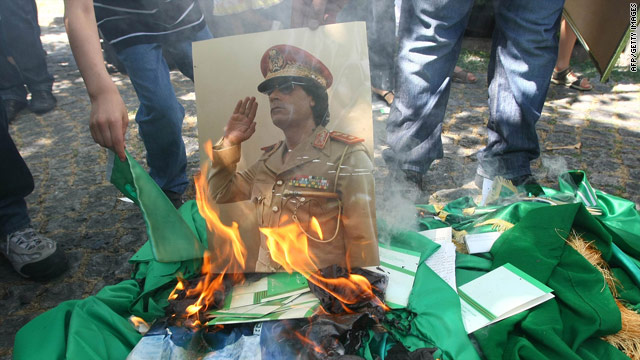 • Gadhafi regime 'crumbling' as rebels battle for Tripoli: "Six months after a ragtag group of poorly trained rebels set out to topple the Libyan regime, the fighters appeared Monday to be on the brink of ending Moammar Gadhafi's 42-year rule."

• Rebels claim 3 of Gadhafi's sons captured: "Rebel leaders said early Monday that they had captured three of embattled Libyan leader Moammar Gadhafi's sons - Saif al-Islam, Saadi and Mohammed - during their siege of Tripoli. "As for the other four sons, we think they are either hiding or they have run away," said Guma El-Gamaty, the Britain-based coordinator for Libya's Transitional National Council."

• NATO fears Gadhafi may strike at civilians strike at civilians: "The 42-year rule of Moammar Gadhafi appeared on the verge of collapse Monday, with rebel supporters making it to the same Tripoli square where regime loyalists had congregated for month."

• Oil market's 'knee jerk reaction' to Libya: "Oil prices were mixed Monday as Moammar Gadhafi's regime appeared to be closer to tottering on the brink of defeat. Brent oil, which is tied to the European market, dropped 1% to $107.55 a barrel, while U.S. crude prices rose more than 1% to $83.46 a barrel."

• Rebel government gears up for role of 'main player' in Libya: "It will take 18 to 20 months to create a political framework for a new government, a Britain-based coordinator for Libya's Transitional National Council said Monday. The transitional council's primary job is to stabilize the country and conduct temporary council elections, Guma El-Gamaty told CNN."