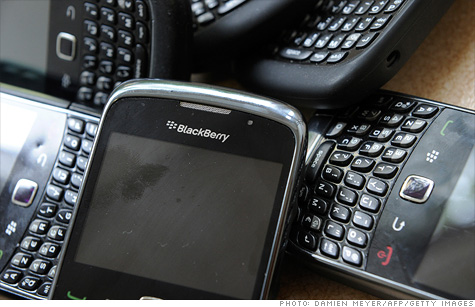 • BlackBerry outage is another black eye for RIMM: "The president of BlackBerry's parent company apologized Thursday for the device's worldwide service outage, and said service levels are improving in many areas."

• Freed U.S. hikers to meet with Hillary Clinton: "Two American hikers detained in Iran for years will meet State Department officials in Washington on Thursday, less than a month after they arrived back home on American soil. Shane Bauer and Josh Fattal will meet with U.S. Secretary of State Hillary Clinton and Deputy Secretary William Burns. Sarah Shourd, who was jailed with them but freed last year, will also join them."

• Report: Custody battle led to California salon shooting: "A custody battle may have provided the motive for a deadly shooting at a Southern California hair salon that left eight people dead, according to affiliate reports."

• New Hampshire primary could be early December: "In a move that would throw the nomination calendar into further turmoil, New Hampshire Secretary of State Bill Gardner is now threatening to move the state's primary into early or mid-December unless Nevada backs down on its decision to hold its caucus on a mid-January date."

• NBA standoff threatens livelihoods of workers at stadiums, nearby shops: "At the Farm of Beverly Hills restaurant just down the street from the Staples Center, workers are bracing for smaller paychecks now that the first two weeks of the NBA’s regular season have been canceled. During basketball season, the restaurant depends on Los Angeles Lakers and Clippers fans for about a third of its revenue. No games means fewer customers and fewer hours for restaurant workers, CEO Fran Berger says."