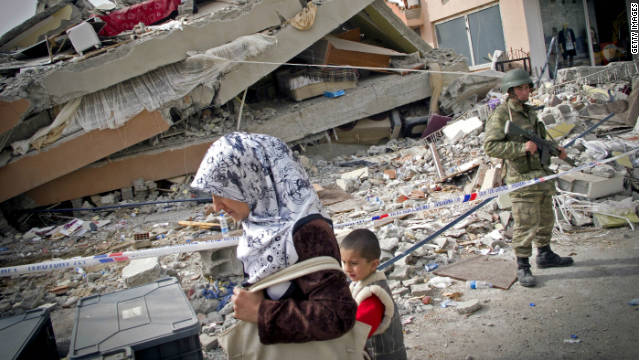 • Death toll soars from Turkish quake: "The death toll from a massive earthquake that shook eastern Turkey over the weekend rose to 523 on Thursday, up from 471 the day before, Turkish state news agency Anadolu reported. An additional 1,650 people were injured by the 7.2-magnitude earthquake that struck Sunday, according to the Turkish Disaster and Emergency Relief Agency."

• Occupy Wall Street protesters support injured war vet: "More Occupy Wall Street protests were scheduled in New York on Thursday, a day after demonstrators marched to support an Iraq war veteran who was hurt in California. Hundreds packed the streets near Manhattan's Union Square on Wednesday in a march in support of veteran Scott Olsen. At least 10 people were arrested in clashes with officers, a New York police spokesman said."

• GDP report: Growth nearly doubles:The nation's economy gained some much-needed strength in the third quarter, as the pace of growth nearly doubled compared to the previous three months. The nation's gross domestic product, the broadest measure of its economic health, grew at a 2.5% annual rate in the quarter after adjusting for inflation. That's up from the disappointing 1.3% growth in the second quarter and the anemic 0.4% pace in the first three months of the year."

• European Union crisis summit comes up with a deal: "European Union leaders announced an agreement early Thursday on debt crisis measures, including a hard-fought deal with private sector investors to take a 50% loss on Greek bonds."

• NBC lands Jack Black comedy series : "Funnyman Jack Black’s stepping behind the camera to produce an upcoming comedy series. According to the Hollywood Reporter, NBC is developing a show with the comedian."