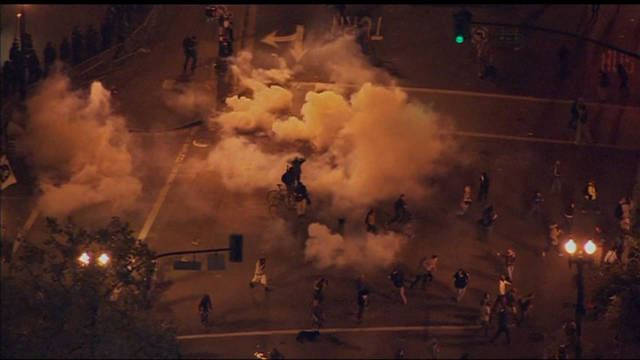 • Occupy demonstrators to protest at major banks: "Occupy Wall Street demonstrators are scheduled to march on the offices of five major banks and financial-services firms in Manhattan on Friday, a day after a California mayor apologized for a police crackdown against demonstrators that left an Iraq war veteran hospitalized."

• Tropical Storm Rina weakens, batters Cancun: "A weakened Tropical Storm Rina whipped the Mexican resort communities of the Yucatan Peninsula early Friday as it lost more of its punch. The storm was buffeting the Mayan Riviera area with maximum sustained winds of 50 mph (85 kph), according to the U.S. National Hurricane Center."

• Girls given equal rights to British throne: "Sons and daughters of British monarchs will have an equal right to the throne under changes to the United Kingdom's succession laws agreed to Friday, British Prime Minister David Cameron said."

• Cards stun Rangers, force game 7: "Here the Cardinals sit, victors in one of the most dramatic championship-series games in the sport's two-century history, having become the first team to score in the eighth, ninth and 10th and 11th innings of a World Series contest - twice off the bat of the local hero, David Freese - that it would go on to win 10-9 and force a do-or-die Game 7 on Friday night."