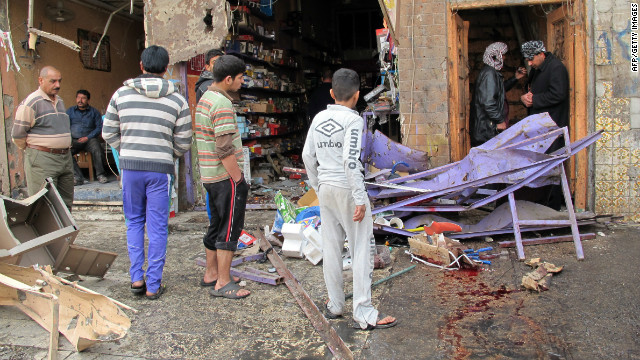 • Bombings rock Baghdad: "A wave of explosions in Baghdad Thursday killed at least 63 people and wounded 185, authorities say, raising fears about the stability of the country amid political upheaval that threatens to undo Iraq's government just days after U.S. troops withdrew from the country."

• Economy's growth weaker than feared: "The U.S. economy was even weaker than previously thought in the third quarter, according to a government report that showed growth slowing to near stall speed. Gross domestic product, the broadest measure of the nation's economic health, grew at a 1.8% annual rate in the quarter. That's down from the previous estimate of 2% growth."

• Wal-Mart pulls formula after baby death: “Wal-Mart says it has recalled a quantity of infant formula this week after a baby died in Missouri. 'We extend our deepest condolences to this baby boy's family as they try to come to grips with their loss,' said Dianna Gee, a Wal-Mart spokeswoman.”

• Floyd Mayweather gets 90 days in jail: “Floyd Mayweather is heading to jail after pleading guilty Wednesday in Las Vegas Justice Court to misdemeanor battery domestic violence and harassment charges. Mayweather was sentenced to six months in Clark County jail, but three months of the sentence was suspended. He must surrender to authorities on Jan. 6, 2012.”