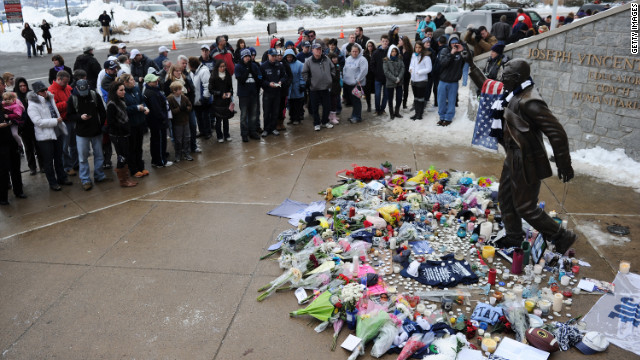 For January 23, 2012 – An outpouring of grief for Joe Paterno at Penn State, European Union imposes new sanctions on Iran and the Giants win the NFC while the Pats snag the AFC...

• Outpouring of grief for Joe Paterno at Penn State: "Penn State students and alumni held a candlelight vigil late Sunday to honor and remember Joe Paterno, the iconic former football coach. Paterno, 85, died Sunday at a State College, Pennsylvania, hospital, according to his family. He had been suffering from lung cancer and had recently broken his pelvis."

• GOP race turns to Florida; Romney to release tax return Tuesday: "After a spirited week of campaigning and debating in South Carolina, all eyes are now on Florida as the GOP presidential candidates prepare for the January 31 primary in the pivotal state. Also this week, Mitt Romney will release his 2010 tax return and an estimate of his 2011 tax liability, the former Massachusetts governor said."

• Giants win NFC, Pats snag AFC: "The Giants are Super Bowl-bound once again - for the second time in five seasons - because Eli Manning and Tom Coughlin never believe what they hear." and "The Patriots will have a tough time winning the Super Bowl if they play the way they did against the Ravens, says Andrew Perloff."