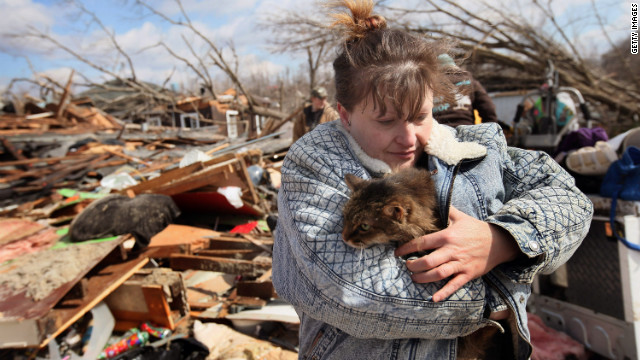 • Family dies, helpful neighbor survives after tornado ravages homes: "The parents and their three children - all 2 or under, including one buckled in a car seat - held hands on the hallway floor of their neighbor's mobile home, praying a fast-approaching storm would show them mercy. Mother Nature answered with a fierce tornado, which violently swept them up, separated them and deposited them about 100 yards away. Four of their limp bodies were found soon thereafter. But for two days, hope lived on in the form of 14-month-old Angel Babcock."

• Observers slam Russia vote as Putin declares victory: "International observers blasted Russia's presidential election Monday, saying: 'The point of an election is that the outcome should be uncertain. This was not the case in Russia.' Russian Prime Minister Vladimir Putin looked set to win Sunday's vote and return to the office he held until he was forced out by term limits four years ago."

• Super Tuesday looms larger for Gingrich than anyone else: "Newt Gingrich,The former speaker of the U.S. House hasn't won a state since South Carolina on January 21, pretty much ceding the headlines to Mitt Romney vs. Rick Santorum. He pins his hope for a return to marquee status on two things: a big win in Georgia and big increases in prices at the gas pump."