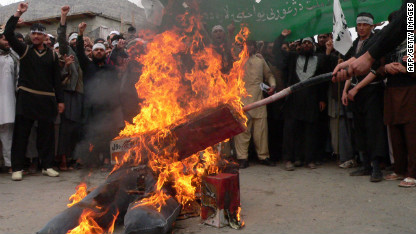 • Afghan killings ignite outrage: "Hundreds of people took to the streets Tuesday in eastern Afghanistan to protest the recent killing of 16 civilians, which has been blamed on a U.S. soldier who walked off base in the middle of the night and went door-to-door on a shooting spree."

• Rains soak, flood southern Louisiana: "Record floodwaters inundated parts of southern Louisiana early Tuesday after intense rains caused flash flooding and prompted hundreds of rescues. Estimates by the National Weather Service put total rainfall at 12 to 18 inches across the region, with possible amounts of 20 or more inches in some areas. A flood warning has been issued until late Tuesday."

• 'Day of Mourning': called in Syria: "Opposition activists have declared Tuesday a day of mourning across Syria as the death toll from a year of government attacks escalates. More than 8,000 people have been killed in the Syrian conflict, including many women and children, said Nassir Abdulaziz Al-Nasser, president of the U.N. General Assembly."

• 'Whitey' Bulger girlfriend to plead guilty: "The longtime companion of notorious fugitive James "Whitey" Bulger agreed to plead guilty to several charges against her related to her infamous 16-year run from authorities with her alleged mobster boyfriend. Catherine Greig will plead guilty to the charges of conspiracy and two counts of identity theft, according to court documents."