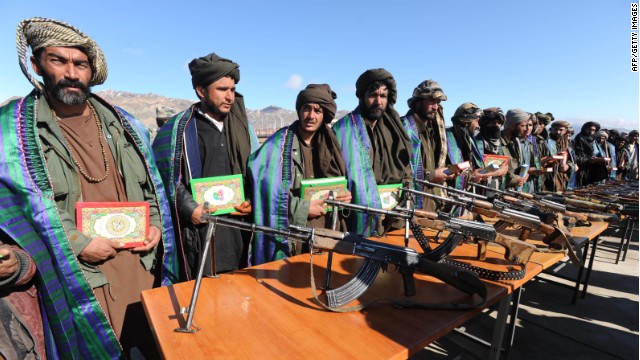 • Afghan Taliban suspend talks: "The Afghan Taliban announced Thursday they have suspended a diplomatic office in Qatar intended for talks with the United States. The group cited what it described as the Americans' 'alternating and ever-changing position' for the decision."

• Jobless rate for veterans plunges: "More veterans are coming back from war and getting back to work in the civilian job force, thanks to efforts by both employers and the government, as well as the improving economy. The jobless rate for Iraq and Afghanistan veterans has fallen to 7.6%, well below the overall U.S. unemployment rate of 8.3%, and nearly five percentage points below the 12.5% rate for veterans a year ago."

• Rescue of 'martyrs' yields survivor in Syria: "Over the past month, video has emerged from the Syrian city of Homs showing killings and other atrocities apparently committed by security forces in neighborhoods that have opposed the government. CNN has obtained footage that is among the most disturbing yet - about a dozen family members killed in one house in what appears to be sectarian brutality."

• 'No end in sight' for GOP campaign: "Rick Santorum took his re-energized Republican presidential campaign to Puerto Rico on Wednesday after key primary victories in the South that raised questions about conservative rival Newt Gingrich's viability as a candidate and portended a long battle with frontrunner Mitt Romney."

• Ex-Google employee says Google+ has ruined the company: "Angry rants about the demise of corporate culture aren't reserved only for ex-Goldman Sachs employees. Microsoft-turned-Google engineer James Whittaker - now once again a Microsoft employee - fired off a scathing blast Tuesday on a Microsoft blog about why he left Google."