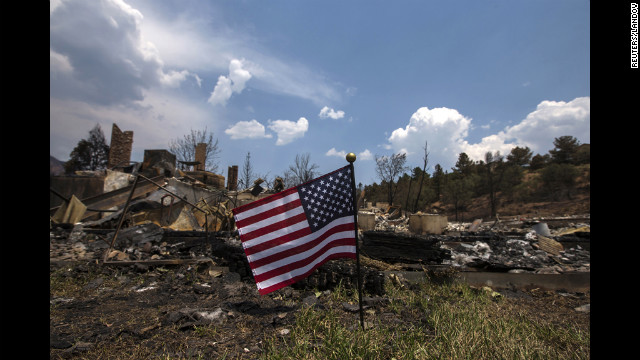 • Two die fighting Western wildfires: "Two crew members on a U.S. Air Force plane died in a weekend crash while trying to battle one of the Western wildfires that have burned hundreds of thousands of acres, family members said."

• 1.8 million sweat out scorcher without AC: "Some of the millions without power after deadly heat-driven storms struck the area Friday flocked to malls, libraries, pools and most any other public place with electricity to seek relief from a massive heat wave blanketing much of the nation."

• British security officials on alert for Olympic terror threats: "News that European intelligence agencies are searching for a so-called 'clean-skin' al Qaeda operative with a European passport should not be surprising."

• Barclays not alone in rate-fixing scandal: "Heads have rolled at British bank Barclays. But it was not alone in manipulating worldwide interest rates. Seven additional banks are cited but not named in documents made public as part of Barclays' settlement last week with the Financial Services Authority, the British banking regulator."

• Dara Torres' bid to be oldest woman on U.S. Olympic swim team comes up short: "Dara Torres' quest at the age of 45 to make her sixth U.S. Olympic team came down to a single, furious lap. She came up short Monday, finishing fourth in the finals of the 50-meter women's freestyle at the Olympic trials in Omaha, Nebraska, behind a trio of women nearly 20 years her junior."