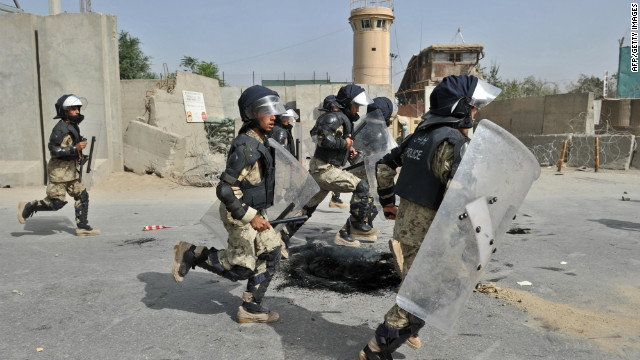 • Afghan protest over anti-Islam film turns into melee: "Demonstrators in Afghanistan attacked police officers along a road leading to the U.S. Embassy in Kabul as tensions remained high Monday in the Muslim world over a movie trailer that mocks the Prophet Mohammed."

• Chicago teachers strike enters 2nd week; mayor takes fight to court: "Chicago school kids won't be back in class until at least Wednesday after teachers union representatives decided not to end a week-long walkout - despite a tentative contract deal reached by union leaders and school officials."

• Protests mark Occupy Wall Street's 1-year anniversary: "It's been one year since Occupy Wall Street began, when hundreds of protesters descended on the nation's financial center and kicked off a nationwide social movement. Organizers are marking Monday's anniversary, dubbed 'S17,' with scores of events and demonstrations."

• Disney to serve beer, wine inside Magic Kingdom: "Disney has announced that for the first time ever, alcohol will be served inside the theme park, according to HLN affiliate News 13 in Orlando."
-
» Follow Piers Morgan Tonight on Twitter