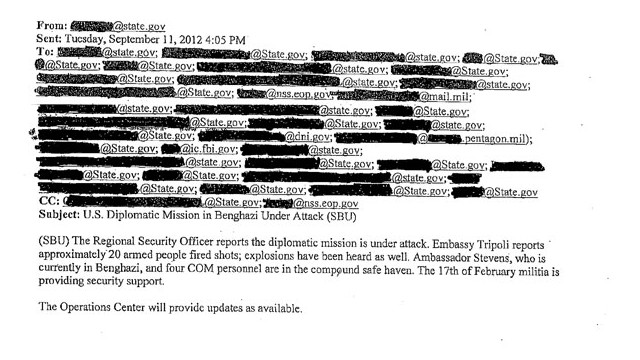 • White House knew of extremist claims in Benghazi attack: "Two hours after the attack on the U.S. consulate in Benghazi, the White House, the State Department and the FBI were told that an Islamist group had claimed credit, government e-mails obtained by CNN show."

• Tropical storm heads for Jamaica: "A strengthening Tropical Storm Sandy is closing on Jamaica, bringing blustery winds and bouts of rain to the island. Early Wednesday, Sandy was kicking up winds of 70 mph and was about 120 miles south of Kingston, Jamaica and is expected to make landfall this afternoon."

• GOP Senate candidate says pregnancies from rape God’s will: "Richard Mourdock, running for U.S. Senate in Indiana, said at a debate Tuesday that pregnancies resulting from rape are intended by God."

• Barnes & Noble customer data stolen: "Barnes & Noble said Wednesday that a data breach at 63 of its stores may have compromised the credit card information of its customers. The bookseller said in a statement that one PIN pad device used by customers to swipe credit and debit cards had been compromised in each affected store."

• IPad mini launched at Apple event: "Apple on Tuesday unveiled a smaller iPad, dubbed the iPad mini, at a highly anticipated event in San Jose, Calif. The device, which has a 7.9-inch screen, is one-third smaller overall than than its 10-inch cousin and weighs less than a pound. It's also 23% thinner than the full-sized iPad."