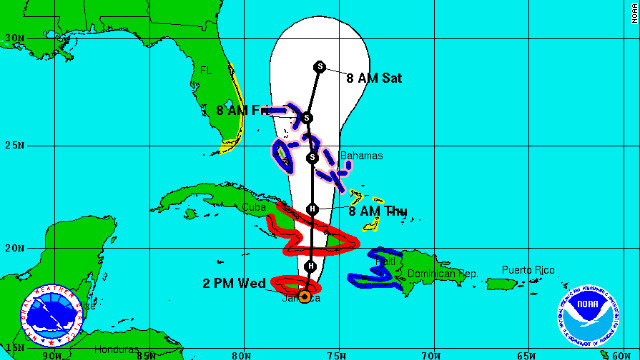 For October 25, 2012 – East Coast urged to be wary of Hurricane Sandy, off-record Barack Obama interview goes public and Microsoft is risking an $18 billion empire on Windows 8...

• East Coast urged to be wary of Hurricane Sandy: "Hurricane Sandy churned over eastern Cuba early Thursday as a Category 2 storm with winds of 105 mph, slipping a bit in strength since making landfall, the National Hurricane Center in Miami said."

• Off-record Obama interview goes public: "New details of President Barack Obama's plans for a second term were given in an off-the-record interview with the Des Moines Register Tuesday but made public only after the paper protested that leaving it private would be a disservice to Iowa voters."

• Bank of America sued for alleged mortgage fraud: "The Justice Department is seeking $1 billion from Bank of America, alleging the bank committed fraud by selling defective mortgages from a program it says was known within the bank as 'the Hustle.'"

• Microsoft is risking an $18 billion empire on Windows 8: "Windows has been Microsoft's most reliable cash cow for nearly three decades. The software giant is gambling all of that success on what it deems to be the company's future: a radically redesigned Windows 8."