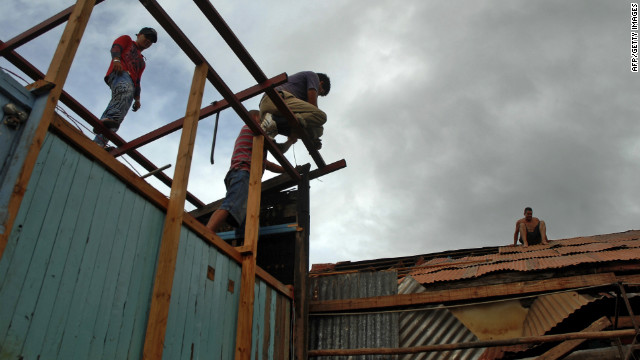 • East Coast urged to be wary of Hurricane Sandy: "Floridians have little to fear from Hurricane Sandy as the storm loses some force and begins veering away, but all the way up the Atlantic Coast, New Englanders are worrying about its fury as a combination of weather conditions threaten to turn it into a disaster for them as early as Monday."

• Ex-Italian PM gets 4-year prison term: "Italy's flamboyant former Prime Minister Silvio Berlusconi was sentenced Friday to four years in prison for tax fraud. Berlusconi is likely to appeal the sentence handed down by a court in Milan, Italy. The case involved his Mediaset group and the purchase of TV rights."

• 3rd-party candidates may swing vote: Gary Johnson and Virgil Goode have no chance of winning the November 6 presidential election, but the two 'third-party' candidates are in position to siphon a few thousand votes from Republican Mitt Romney and perhaps President Barack Obama in some of the handful of battleground states considered up for grabs and therefore decisive in determining the winner."

• U.S. economy picks up steam: "U.S. economic growth picked up in the third quarter, boosted by stronger consumer spending, an improving housing sector and increased defense spending. Gross domestic product, the broadest measure of the nation's economic health, grew at an annual rate of 2% from July to September, the Commerce Department said Friday, faster than the 1.3% rate in the second quarter."

• Virtual reality avatar inspires gamer to hit the gym: "Brand loyalty is one of the reasons Marcus Dickinson first decided to shape up. During his trip to the 2009 'EVE Online' FanFest, real life hit him smack in the face.