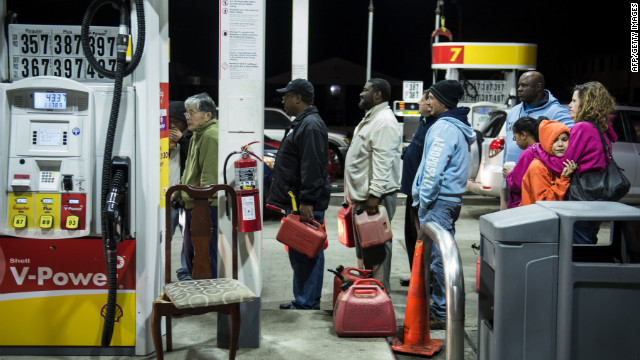 Need to Know News: Sandy's wallop leaves Northeast reeling; Will you be able to vote next Tuesday?

For October 31, 2012 – Sandy's wallop leaves Northeast reeling; transit systems struggling to restart and will you be able to vote next Tuesday? Probably so...

• Sandy's wallop leaves Northeast reeling: "The Northeast Corridor slowly struggled back to life on Wednesday after the knockout punch from Superstorm Sandy. Millions in New York City, New Jersey and other cities and towns along America's most populous urban stretch coped with major losses and daily inconveniences."

• Will you be able to vote next Tuesday? Probably so: "Widespread damage in the East from Superstorm Sandy threw state and local agencies tasked with running next week's election into turmoil, sending them scrambling to make sure they can accommodate voters. It is unlikely voters in the hardest hit states will be given an extension if they cannot access polls, despite damage from the storm."

• Stocks mixed as market reopens for business: "U.S. stocks were mixed at the open Wednesday as the markets reopened following a two-day closure due to Hurricane Sandy. The Dow Jones industrial average rose 0.5% and the S&P 500 gained 0.4% but the Nasdaq was little changed. Volume is expected to be very high as the NYSE, Nasdaq and other markets execute their first trades after two unscheduled days in the dark."

• Eurozone unemployment hits record high: "Unemployment in the eurozone rose in September to a record high of 11.6%, the European Commission's Eurostat statistics agency reported Wednesday. The figure was a slight increase from 11.5% in August."

• Transit systems struggling to restart: "While Superstorm Sandy's punch has weakened, its wrath is still being felt. Walloped by severe storm damage and flooding, the New York City area's extensive transportation system is struggling to get back online, while some area airports are resuming service on Wednesday. Other Northeast and mid-Atlantic airport and ground transportation systems were gradually resuming operations."