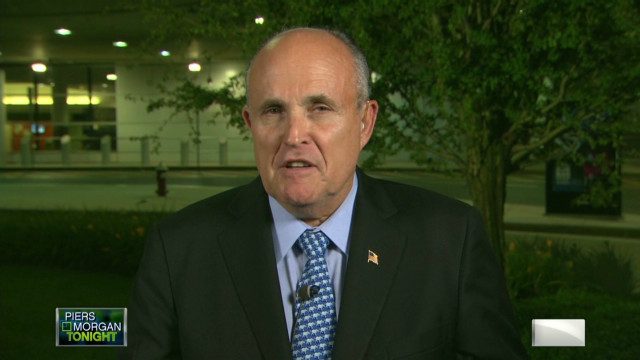 With the general election four days away, on Friday "Piers Morgan Tonight" shines its spotlight on the key battleground state of Ohio.

Anchoring live from his studio in New York, Piers Morgan will welcome Mitt Romney surrogate and former GOP presidential candidate Rudy Giuliani from the “Buckeye State" for his perspective and insight into the final stages of the race for the White House.

Coming with a robust 18 electoral votes, common consensus says that to win the presidential election, a candidate almost certainly needs to win Ohio. Dating back to 1964, the Midwestern state has served as a microcosm for the nation, as in each election since the contest which saw Lyndon B. Johnson defeat Barry M. Goldwater, the candidate to capture Ohio landed himself in Washington roughly two months later. And as important as is the "Buckeye State" for incumbent Barack Obama, it's that much more critical for Romney, as no Republican has ever won the presidency without first winning Ohio.

With each of the two men campaigning across Ohio today, both Obama and Romney released opinion pieces that are running exclusively on CNN.com.

"America is a land of opportunity," declares Romney in his article. "But lately, for too many Americans, opportunity has not exactly come knocking."

As for Obama, he writes that "Change is an America that turns the page on a decade of war to do some nation-building here at home."

Read each of the above columns by the two men battling to lead the nation for the next four years, then tune in this evening at 9 as Piers Morgan receives an on-the-ground report from Giuliani in Oho.
-
» Follow Piers Morgan Tonight on Twitter