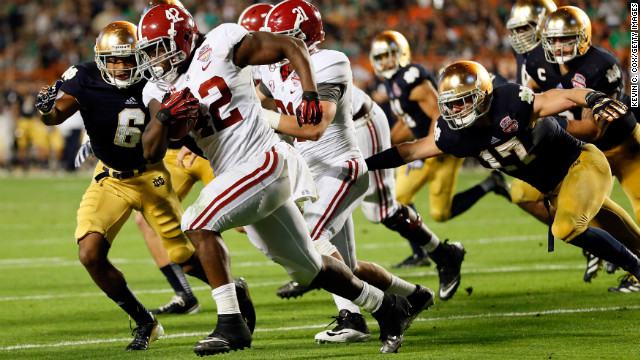 • Alabama wins its third BCS title in four years: "Alabama's 42 to 14 thrashing of Notre Dame in Monday night's BCS National Championship game was the Crimson Tide's second in a row. It is also Alabama's third national title in the last four years."

• Cyanide linked to $1 million lottery winner's death: "The Cook County medical examiner's office initially ruled Urooj Khan's manner of death natural. But after being prompted by a relative, the office revisited the case and eventually determined there was a lethal amount of cyanide in Khan's system."

• Rioting rocks Belfast for 5th night amid Union flag protests: "Police and their vehicles were attacked with petrol bombs, hatchets and sledgehammers in East Belfast as rioting broke out in Northern Ireland for a fifth consecutive night, police said Tuesday."

• Netflix, Time Warner strike new content deal: "Users will be able to stream complete seasons of several series produced by Warner Bros., including NBC's "Revolution" and USA Network's "Political Animals," according to a statement issued by Time Warner on Monday."