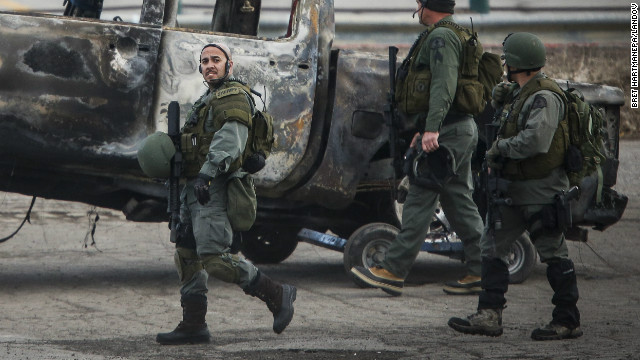 • Manhunt continues for ex-police officer wanted in 3 deaths: "Police continued the massive manhunt for Christopher Dorner early Friday in a Southern California mountain town as a severe winter storm that may help cover the tracks of the suspected cop killer moved in."

• Whopping winter storm nearly in Sandy's path: "A potentially historic winter storm was closing in on New England on Friday with tens of millions of people in its sights. The storm has canceled thousands of flights and could bring 2 feet of snow to cities like Boston."

• Angry crowds rally in Tunisia at funeral of shot opposition leader: "Chanting loudly and waving flags, tens of thousands of people turned out Friday for the funeral of Tunisian opposition leader Chokri Belaid, whose assassination has sparked political uncertainty and violent protests."

• UK beef under microscope as horsemeat found in lasagna: "UK food safety officials have ordered the testing of all beef products following the discovery of horsemeat in beef lasagna sold by UK firm Findus, only weeks after many meat lovers were horrified to learn horse and pig DNA had been found in burgers."

Leave a Reply to Polenböller Kaufen