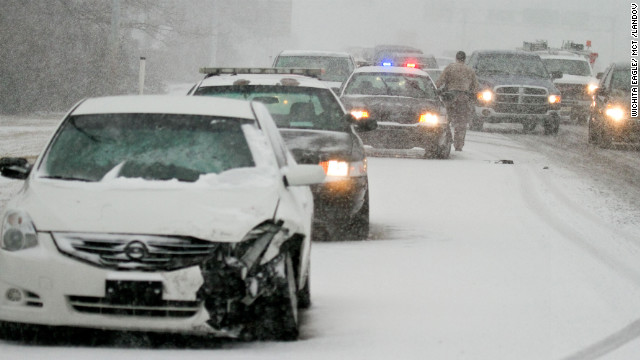 • 60 million in path of winter storm: "A massive winter storm spanning 20 states could dump as much as a foot-and-a-half of snow in some places Thursday and bring life to a standstill in parts of the central United States."

• Corpse found in L.A. hotel's water tank: "Tourists staying at a Los Angeles hotel bathed, brushed teeth and drank water from a tank in which a young woman's body was likely decomposing for more than two weeks, police said."

• 7 spending cuts you'll really feel: "Millions of American families are bracing for the forced budget cuts that could kick in on March 1. Some of the hardest hit would be 2.1 million federal workers who could be spending up to 22 business days at home without pay on a furlough."

• Oscar-nominated Palestinian filmmaker detained briefly at LAX: "The Palestinian maker of a film nominated for an Oscar was briefly detained by U.S. officials who questioned the validity of his Academy Awards invitation as he and his family arrived in Los Angeles for this weekend's event, his publicist told CNN on Wednesday."
-
» Follow "Piers Morgan Tonight" on Twitter
» Follow "Piers Morgan Tonight" on Instagram