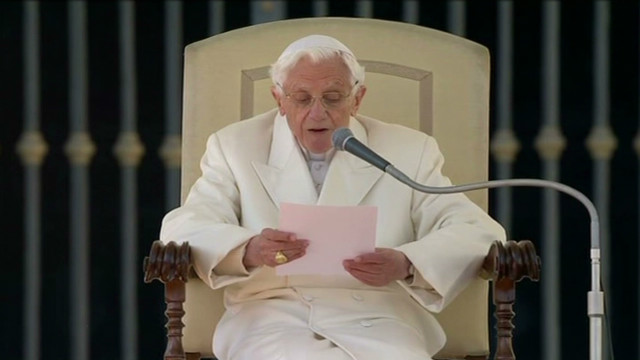 Need to Know News: Pope Benedict speaks in final papal audience; Spending cuts are about to get weird

For February 27, 2013 – Pope Benedict speaks in final papal audience, spending cuts are about to get weird, and Yahoo work-from-home policy riles workers everywhere...

• Spending cuts are about to get weird: "Starting Friday, federal agencies will be forced to make cuts to their programs without knowing what their actual budgets for this year will be. Why? Because Congress never passed a budget, just a stopgap funding measure that expires soon."

• Chuck Hagel sworn in as defense secretary: "Chuck Hagel, the former Republican senator from Nebraska, was sworn in as secretary of defense Wednesday after a bruising nomination fight."

• Snowstorm loses steam, but still packs punch: "While residents in Kansas and other Plains and Midwest states still had tons of wet, heavy snow to clean up, and some remained without power, the storm that had socked some places with more than a foot of snow had moved on."

• Yahoo work-from-home policy riles workers everywhere: "The change, announced Monday by Yahoo human resources chief Jackie Reses, is expected to affect hundreds of employees. It is one of many changes CEO Marissa Mayer has made since being hired last July."