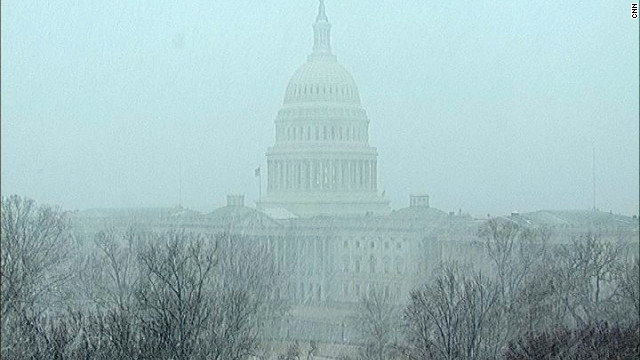 • 'Snowquester' shuts down Washington, snarls air travel: "They're calling it 'snowquester.' A winter storm that set snowfall records in Chicago arrived in the capital region early Wednesday, forcing federal offices in Washington and school districts around the area to close - hence the play on 'sequester,' the forced spending cuts making the rounds in government."

• Venezuelan leader Hugo Chavez's death leaves many questions: "The death of the longtime charismatic but controversial leader, Hugo Chavez on Tuesday leaves many unanswered questions that Venezuela and the world must now grapple with."

• Syrian exodus reaches 1 million: "The number of Syrians who have fled their country since the civil war began almost two years ago reached 1 million Wednesday, the U.N. refugee agency said."

• First furlough notices go out: "The first furlough notices for government employees have gone out. The Army has started sending out hundreds of letters to unions - including on Feb. 28 and March 1 to the Aberdeen Proving Ground in Gunpowder, Md., as well as the Corps of Engineers in Walla Walla, Wash. - warning that employees will be forced to stay at home without pay one day each week from April 22 through Sept. 21."

• A tardy Justin Bieber angers fans: "Singer Justin Bieber kept thousands of fans and their tired, outraged parents up way past their bedtime Monday after arriving on stage nearly two hours late for a sold out show at London's O2 Arena."

Leave a Reply to Darrick Berthelsen