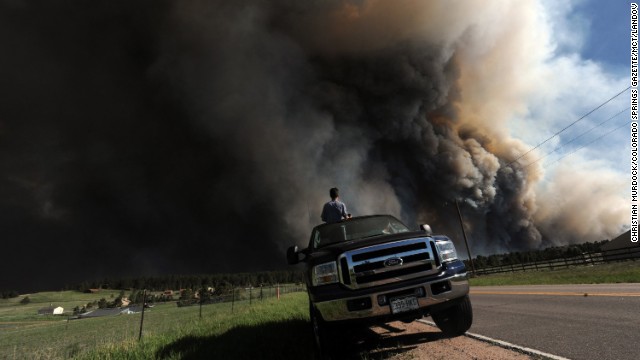 Tonight at 9: Updates from the Black Forest fire, Joselyn Martinez on tracking down her father’s killer, a reunion between a Santa Monica shooting survivor and her hero

Since the Black Forest Fire broke out near Colorado Springs, Colo. on Tuesday afternoon, officials have issued evacuation orders for more than 2,500 homes, and over 7,500 acres of land have been burned. As the fire continues to rage through the area, tonight Piers Morgan invites El Paso County Sheriff Terry Maketa to share the latest details from the ground.

Meanwhile, in the interest of offering one happy ending to an otherwise sad story, Wednesday evening's show will feature a live interview with the animal-loving firefighter Colby Helgerson who stole hearts across the land with his courageous rescue of a baby fawn.

Also, “Piers Morgan Live” will welcome Joselyn Martinez, the New York woman who used social media and the Internet to solve a case that had eluded authorities for more than a quarter century: that of her father's murder. Joining the host for a face to face conversation, Martinez will share her fascinating story, revealing details of the ways in which she doggedly pursued justice in the name of her late dad.

And, following her emotional appearance on “Piers Morgan Live” earlier in the week, tonight Debra Fine will return to the show to reunite with Jerri Cunningham, the woman that helped saved her life. After being shot four times by the Santa Monica man who led police on a violent rampage last Friday, Fine was rescued by Cunningham, a mere bystander to the dramatic event.