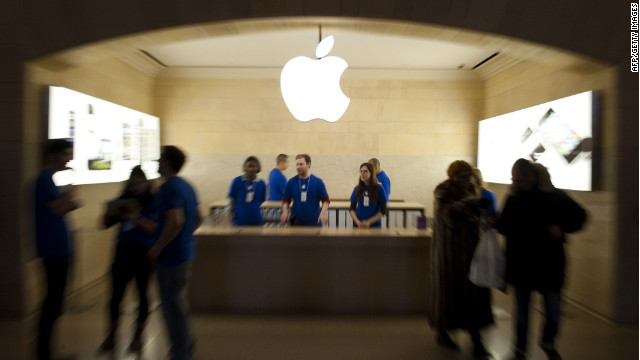 On Monday, the brains behind "some kind of fruit company" unveiled the latest operating system for the iPad and iPhone, Apple's iOS 7.

What we're reading: The latest on the Norway terror attacks and Amy Winehouse

Here's the latest from CNN on the Norway terror attacks and the death of Amy Winehouse:

• The suspect, Anders Behring Breivik, was in court today: "The suspect in the deadliest attack in Norway since World War II has acknowledged carrying out the mass shooting and bombing, and claims to have worked with two other cells, a judge said Monday...Police refused to release information about their investigation into the possibility that two cells aided Breivik, saying Monday that a court hearing was closed so as not to disclose information."

• An autopsy on Winehouse was inconclusive Monday: "Investigators may not know what killed singer Amy Winehouse until they get results from lab tests on her blood and tissue, due in about two to four weeks, according to Scotland Yard Monday...An autopsy was completed at St. Pancras Mortuary Monday afternoon, two days after the singer died in her London apartment."

Watch for more on both these stories during "Piers Morgan Tonight," this evening at 9pmET/PT.

What we're reading for tonight's show: Two of the 'gang,' Prince Alwaleed, Bruni

• Two members of the "Gang of Six" senators working on a bipartisan debt reduction plan will be on tonight's show – Tom Coburn and Kent Conrad. Here's the latest information on where the debt talks stand. As for the "gang" plan: "Lawmakers are also continuing discussions focused on the $3.7 trillion debt reduction blueprint put forward by the "Gang of Six," a group of three Democratic and three Republican senators."

• Also on the show will be Prince Alwaleed Bin Talal, a major shareholder in News Corp. as well as several other American companies. He will speak about Rupert Murdoch, the debt and the Middle East. As for Murdoch, he said yesterday that he "fully supports" the News Corp. Chairman.

• And we have New York Times columnist Frank Bruni, who will discuss the economy, politics and more. Bruni previously was a restaurant critic and White House correspondent for the paper. Here's his latest column about the first same sex wedding in New York, taking place this weekend.

• Michael Jackson’s doctor may say the singer killed himself. (From Geoff Doner)

• Why is "Black Swan" so successful? If you ask Natalie Portman, she’ll say girl-on-girl action. (From GD)

• How exactly did Sir Elton John and David Furnish name their son? (From GD)

• Roger Ebert has given two thumbs to an Oscar nod for a YouTube video of the recent New York blizzard. (From Steve Krakauer)

• How could America be more tolerant of Muslims? Maybe a Muslim "Cosby Show" says Katie Couric. (From SK)

• Newsweek reveals what Julian Assange did for Christmas, in an amazing photo gallery. (From SK)

• Despite reports the Spider-Man musical will resume performances tonight, the scene outside the theater is still a bit of a mess.

• Julian Assange makes a cameo, rapping, in a music video about Wikileaks and other current events. Seriously.

• An emotional story about Rep. Nydia Velazquez, who left her sick mother's side in San Juan to fly to D.C. and make the 9/11 first responders health bill vote yesterday.

• A man walked into the Romanian parliament, jumped off a 22-foot balcony and chanted "freedom" as he was being taken away, suffering minor injuries.

• Stephen Baldwin is suing Kevin Costner over the oil-filtering invention BP used to help clean up the disaster in the gulf.

• A "Secession Ball" in South Carolina "drew protesters along with ballroom dancers in the latest episode of America's festering conflict over race and the history of the Civil War." (From Maria Spinella)

• Larry David, of "Curb Your Enthusiasm," writes in the New York Times about his tax cut enthusiasm. (From Steve Krakauer)

• Vince Cable, England's Business Secretary, has "declared war" on Rupert Murdoch – Piers asks "what more does Vince Cable have to do to get fired." (From SK)

• Is "Sarah Palin's Alaska" headed for a second season? (From SK)

• Ricky Gervais' "holiday message" is 1,600 words in the Wall Street Journal about atheism. (From Steve Krakauer)

• Police in Belarus, following a disputed election Sunday, have "violently cracked down on those in the streets for the demonstration, including journalists." (From SK)

• The social networking platform Foursquare has added photos and commenting to its iPhone app, with updates for Blackberry and Droid coming soon. (From SK)

• Prince William and Kate Middleton made their first public appearance as an engaged couple over the weekend. (From SK)

• Sarah Palin made s'mores "in honor of Michelle Obama, who said the other day we should not have dessert." (From SK)

• Marriage is increasingly out of favor in France. Civil unions are becoming the hipper, more popular choice – and the overwhelming majority of people using the option are now straight couples. (From Maria Spinella)

• A series of disturbing revelations regarding the girl who committed suicide after accusing a University of Notre Dame football player of sexual assault. (From Steve Krakauer

• If anyone can get rid of the BCS, maybe it will be Mark Cuban. (From SK)

• The SAG nominations were announced, and there aren't many surprises. That said, Betty White? (From SK)

• In a Daily Beast interview, Kevin Spacey talks about his new film, “Casino Jack,” and discusses rumors about his sexuality. (From Geoff Doner)

• A breakdown of "Tripgate," the New York Jets and the rest of the NFL. (From SK)

• In a radio interview, President George W. Bush says the tax breaks passed during his term in office would be less controversial if they weren’t called the “Bush Tax Cuts”. He also says it does the country no good for him to defend himself or criticize his successor during his post-presidency. (From Maria Spinella)

• Michael Jackson’s posthumous album “Michael” hits stores today on the anniversary of his 1991 “Dangerous” album hitting the top of the charts. (From GD)

• Fox analyst, and former NPR contributor, Juan Williams, has a new two-book deal, with the first focusing on free speech. (From Steve Krakauer)