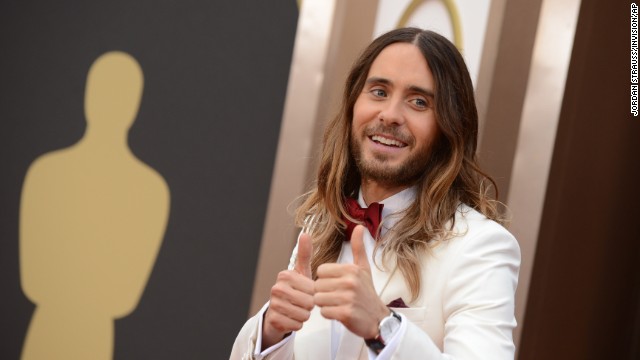 Once again donning a Dolce & Gabbana tuxedo, and this time around pairing the ensemble with a Tom Ford shirt, on Sunday evening Piers Morgan stood "suited and booted" amongst the world's biggest film stars, anchoring CNN's red carpet coverage of the 86th Academy Awards.

For nearly two hours the "Piers Morgan Live" host did what he does best: rubbed elbows and traded jabs with the likes of Amy Adams, Jennifer Lawrence, and Kate Hudson, while nearly charming the white dinner jacket off the back of Jared Leto.

For a comprehensive representation of Morgan's night on the famed Hollywood red carpet, scroll down, and dress to impress .... END_OF_DOCUMENT_TOKEN_TO_BE_REPLACED

On the heels of David Frost's death, on Sunday Piers Morgan joined CNN's "Reliable Sources" program to reflect on the late journalist's life.

"He was the fearless interviewer," Morgan said live on CNN Sunday. "I think for anyone in the world of journalism and television journalism, Sir David was the best."

Piers Morgan on his exclusive interview: "Rachel Jeantel told us more about Trayvon Martin last night in 25 minutes than I heard in the entire trial"

On the heels of an exclusive interview with Rachel Jeantel, this morning Piers Morgan joined CNN's "Newsroom" program to offer his insight and reaction.

After watching a clip alongside anchor Michaela Pereira, the "Piers Morgan Live" host explained his impressions of the young woman who had unwillingly become the early star of the George Zimmerman trial:

"Rachel Jeantel is not uneducated. She's a smart cookie," said Morgan, refuting what he deemed to be the account of some of the jury, and the national media as a whole. "What she didn't like was the environment that Don West created in that courtroom of hostility. That's a different thing."

With his interview from the evening before having offered a side of Jeantel that proved remarkably different than the persona she portrayed during her testimony, Morgan suggested that her exclusive comments have opened a window into the life and world of Trayvon Martin that hadn't previously been accessible: END_OF_DOCUMENT_TOKEN_TO_BE_REPLACED

Eva Longoria on being an Obama surrogate: "I've been speaking to two big communities important to the president, the women's community and the latino community"

"I have to stand taller here," joked Longoria. "There are a lot of important people."

Longoria, the co-chair of Obama's national re-election campaign, will address the DNC on Thursday before the president takes the stage:

"I was honored they would ask me," admitted the former "Desperate Housewives" star. "I've been speaking to two big communities important to the president – the women's community and the latino community – and so I will be speaking about those issues, a little narrative about my American Dream and how I'm living proof of that." END_OF_DOCUMENT_TOKEN_TO_BE_REPLACED

Piers Morgan joins Brooke Baldwin on "CNN Newsroom" to talk Casey Anthony: "I thought it was an extraordinary moment"

In the aftermath of Tuesday's fascinating phone call with Casey Anthony, this afternoon Piers Morgan joined host Brooke Baldwin on "CNN Newsroom" to share insight from the conversation.

Joining the Atlanta-based program from his New York City studio, the "Piers Morgan Tonight" host detailed the experience, touching upon everything from Anthony's state of mind, to how he landed the interview to begin with:

"Well, it was very unexpected, because I was interviewing her lawyer, and he'd been booked a few days before," explained Morgan. "I said 'Oh, is there any chance that Casey Anthony could call in? Is that even a remote possibility?' And he said, 'Well, no, not on air, but what I can do, is get her on the phone for you right now.'"

As the recent Diamond Jubilee co-anchors continued to discuss Tuesday's now-famous phone call, Morgan revealed what he felt were some of the most-surprising elements: END_OF_DOCUMENT_TOKEN_TO_BE_REPLACED

The 80's are back, and Piers Morgan isn't happy about it

As today's film and television culture looks back to yesteryear, the host of "Piers Morgan Tonight" is feeling less nostalgic, and more frustrated. As referenced on CNN.com in an article entitled "Piers to Hollywood: Get out of the stone (washed) ages", Piers Morgan used a recent edition of his franchise segment "Only in America" to say of the 1980's, "personally, I would rather forget them."

Nonetheless, Hollywood has hitched it's wagon to the days of stone washed jeans and really big hair, bringing back such hits as "21 Jump Street," "Footloose," and even the soon-to-be-released "Dirty Dancing" reboot.

While Morgan finds the throwback efforts to be "backward," Piper Weiss of Yahoo! Shine says the trend is a natural progression, as the children influenced by 1980's, are today's directors and producers:

"It's kind of fun to have a reason to introduce our pop culture past to kids today and make them more media-literate in terms of how their stuff has been influenced by the stuff we grew up with."

To read more about Piers' resistance to the 1980's resurgence, and the "Only in America" franchise, check out the full CNN.com article.

The conservative blogger was a regular guest of "Piers Morgan Tonight," appearing as recently as Tuesday evening following the Republican primaries in Arizona and Michigan.

Sitting across the table from Breitbart less than two days ago, Morgan says he saw nothing to indicate any health issues: "He looked really good, and we said that on air. I'm just as shocked as anybody about what's happened."

Piers Morgan: "You should be free to ask any question that you like"

Ahead of tonight's premiere at 9pmET, Piers Morgan is all over CNN today talking about the new show and the Oprah Winfrey interview.

Earlier this afternoon he talked with Ali Velshi about upcoming guests, his interview style and...suits. 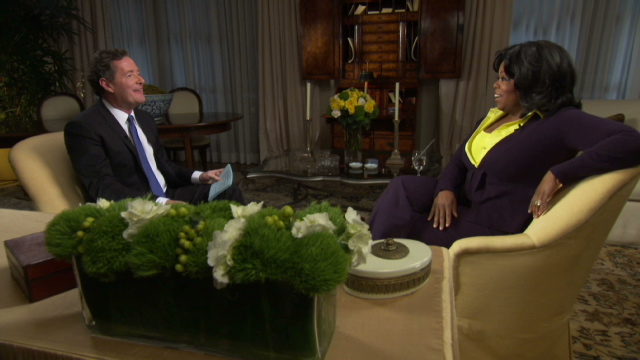 In this first clip from the Oprah Winfrey "Piers Morgan Tonight' interview, Piers Morgan asks "what advice would you give Michael Vick?"

Oprah didn't want to answer – because she's saving her thoughts for when she interviews the NFL Comeback Player of the year. But Piers is trying to book Vick too. And then a bet was hatched. END_OF_DOCUMENT_TOKEN_TO_BE_REPLACED

Above, you can see the part of the interview where Piers interviews Anderson.