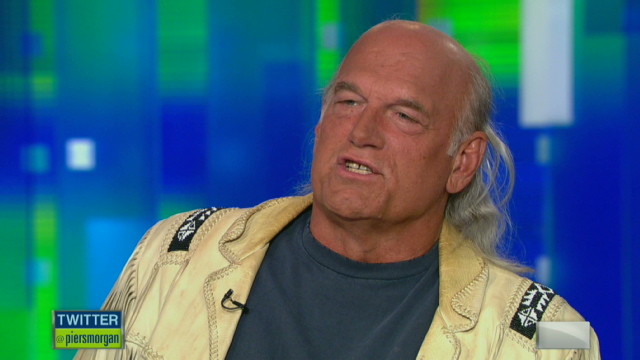 Does government control too much of our lives? Are the two political parties just as bad as each other? Should the US have more Independents? From guns to government to who should win the election, Jesse Ventura is speaking out and taking your questions!

What to expect from tonight's live town hall: #OccupyPiersTonight

If you are part of the 99% or know someone who is, tonight's "Piers Morgan Tonight," live at 9pmET, is for you. END_OF_DOCUMENT_TOKEN_TO_BE_REPLACED

Looking back at the West Memphis Three: a strong reaction to Piers Morgan's interview

On May 5th, 1993, I was almost 8 years old – the same age Stevie Branch, Christopher Byers and Michael Moore were when they were brutally murdered in West Memphis, AR. It’s been over 18 years since that day, and six weeks ago, the three men that were convicted of their murders were released from prison.

Damien Echols, Jason Baldwin and Jessie Misskelley were charged with murdering the three boys and spent their entire adulthood behind bars, and for Damien, on death row. Last week, Piers Morgan interviewed Damien and Jason in an emotional and powerful interview – and the response on our Twitter, Facebook and blog has been incredible. END_OF_DOCUMENT_TOKEN_TO_BE_REPLACED

What happened after the Christine O'Donnell walk off? A first person account

Minutes after Christine O'Donnell walked off her interview with Piers Morgan, I walked into her green room to escort her and her team out of the building. It's standard procedure for a member of our team to walk each and every guest out after the show. Sometimes that means you get lucky and ride in an elevator with Demi Moore and Ashton Kutcher. Other times, that means you're the first person Christine O'Donnell meets after she storms off the set, upset with questions regarding her stance on gay marriage. END_OF_DOCUMENT_TOKEN_TO_BE_REPLACED